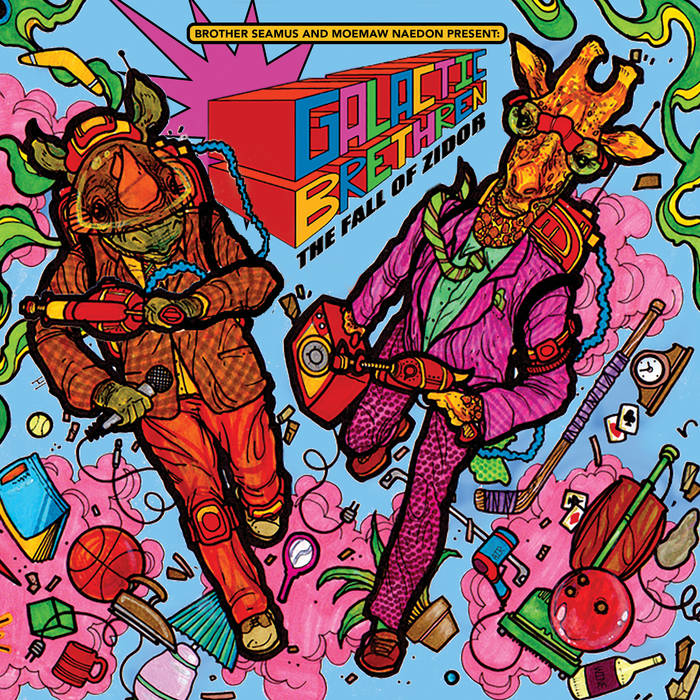 The Galactic Brethren are a time traveling sonic force consisting of Moemaw Naedon, Brother Seamus, and their mischievous sidekick; TJ. One afternoon in Naedons lab, Brother Seamus and Naedon were checking out their recent digs from a local record shop, when, let's just say, things went in an unexpected direction. What follows is a twisted cosmic tale they were able to harness and bring to you on their album; ''The Fall of Zidor" They made this album after a long hazy journey through the wormholes of time, which includes tales of: record digging, the apocalypse, a mutant regime spearheaded by a tyrant named Zidor, explorations into the buddhist theory of unnattachement, and extreme use of a drug/substance called timedust.
They bring these thrilling tales to you the only way they know how; with abstract rhymes over beats made entirely on an MPC, with sounds hand picked from their personal record collections. Take a trip with the Galactic Brethren, and hope you make it to the Safe House.

"With colourful artwork that depicts the pair in an animal hybrid state, sporting space age weaponry and smart suits, the packaging of this work lends some imagination as to what it contains… A throwback to the golden age of rap, reviving 80s beats contrasted with free style bars and a horror come sci-fi storyline which both contemporises and sensationalises the album that is something of a journey. Forgotten Lands” describes the mutating effects of the nuclear wasted earth, taking shape in the form of shark-men, giant turtles and reptilian soldiers, where the populations are ruled over by evil power plant owners. This abstract portrait of a dystopian future four thousand years in time seems to form a black mirror image of the modern world, albeit with cult references to comic book-esque hybrid mutants, with Vietnam, Hiroshima and unethical oil companies all springing to mind"