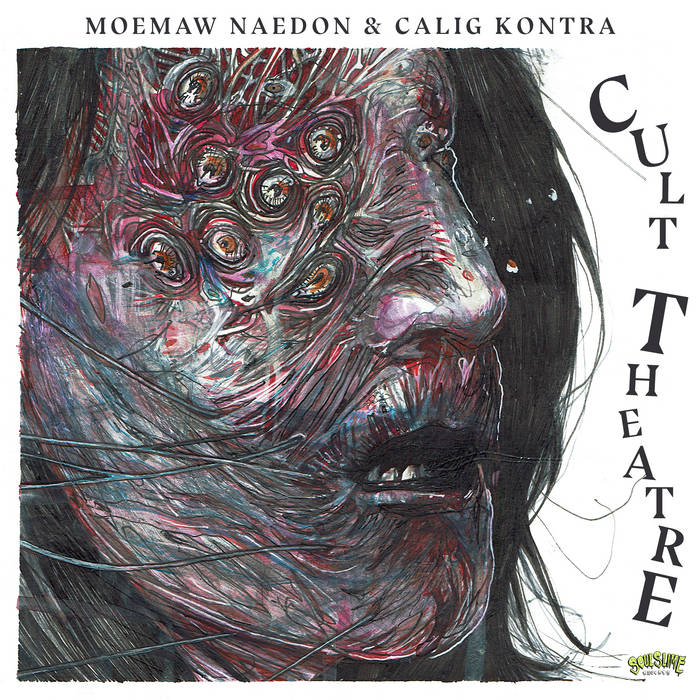 Stefan aka That Hip Hop Guy

When Calig came up with the idea for the project, Cult Theatre just clicked because he heard the album as “a soundtrack to an old grindhouse-type film from a projector screen.” Moemaw knew they had the right name, too: “I thought it was perfect since we’re both so visual with our bars and the album has a non-stop cohesive feel to it, like a movie, and the vibe is dark and psychedelic in typical ‘cult’ fashion.”

That vibe is apparent from the jump as the two emcees get underway on the opening track, “A New Abyss,” a sinister jaunt through “broken beer bottle glass and microphone boom bits.” Moemaw and Calig keep the pace on the ensuing eight cuts that include a woozy back-and-forth banger on “Pass the Vodka” and a dream collaboration with Lord Goat (fka Goretex of Non Phixion) on “Witches Sabbath.”

Another instant standout is “Future Dystopia,” which Calig calls his favorite track. “Moemaw blacks out on that verse and hook,” he explains. “Plus I think it summarizes the album pretty well.” It’s actually that shared reverence for one another’s craft that makes Cult Theatre such a success. Moemaw and Calig don’t only sound great together on the record; they’re also quick to praise the other with rich details that only two close collaborators could really understand. And with Cult Theatre sounding this damn good, we can only hope that they bless the hip-hop community with more music in the future.

Cult Theatre is due out 6/3/21 both digitally and on vinyl in limited quantities. Pre order the vinyl now and shipping will begin on 5/31!